The third book in the Central Division Series, titled Discarded, is nearing the finish line.  My goal is to publish it by the end of March 2016. 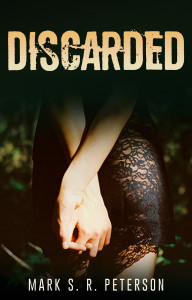 At this point, I’d like to share the prologue.  This is still a work-in-progress, but is getting close to done.  This story deals with the larger issue of human sex trafficking, which is a scary subject in and of itself.  Here is the prologue.  Enjoy!

Kassi Young awakens to darkness, save for the amber streetlights whizzing by overhead.

She’s in the back of a car, lying across the seats.  The stench of musty, old leather and cigarette smoke causes her throat to convulse.  The lump of her cell phone in her front pocket digs into her hip.

She inches her hand down, careful not to make any sound against the leather seats.

“Charlie wants to know the ETA,” the female passenger says.

Kassi knows the driver tonight as Mitch, but doesn’t think that’s his real name.  Last month, she heard someone call him Dave.  And before that it was Matt and even Bob.  She doesn’t know the woman at all.  She’s been a mystery before tonight.

“I’d tell him if I knew where the fuck I am,” Mitch says.  “Goddamned fucking road construction.”

Kassi slips the cell out.  She glances up, just as a streetlight passes by, and luckily sees only the back of the seat.

Her cell is off.  With a limited amount of places to charge it where she lives, she keeps it off until she needs it.  She learned this the hard way when she first started living on the streets.  Her first night out, a girl named Megan saw her using Facebook and told her the web uses up too much juice.  “Trust me, I even suggest shutting off all web stuff.  Limit it to texting.”

Kassi didn’t heed the warning.  Her cell died in the middle of the night.  The only available power outlets were at Rosie’s, the community church, or at the homeless shelter, the latter if she’s lucky to snag a spot for the night.  Which she didn’t.  Rosie’s was closed then and the church outlets had a very long line.

Despite being in vibrate mode now, her cell still makes the usual droid sound when powering up.  Holding her thumb over the speaker along the back, she pushes the power button.  The screen lights up and she immediately presses it against her chest, praying Mitch and the woman don’t see it.

“Do you even know if we’re going the right way?” the woman asks.

“How the fuck am I supposed to know?  Why don’t you check on our passenger.”

Kassi closes her eyes as she hears the crinkle of leather in front of her.  She wraps both hands over the cell, concealing it the best she can.

But who is she gonna call?  She can’t call her parents.  Even if they know where she is and what she’s doing–or what she is supposed to be doing, which is earning a few bucks sucking or fucking–they still aren’t able to help.  Not even her two friends, Pink and Lemon, can do anything.

She counts to twenty and peeks open one eye.  A streetlight passes by, illuminating the headrest and nothing more.  She hits the phone icon, careful not to allow very much light from the screen to seep up, and then taps the dialing pad.

“911 emergency,” the dispatcher’s voice says and Kassi immediately presses her thumb over the ear speaker.

“You hear something?” Mitch asks.

Kassi brings the cell up to her cheek and whispers, “Help me.”

A hand snatches the cell away from her, a long fingernail scratching her cheek.

“Did you even bother to search her?” the woman asks.

“What are you gonna do, Russ?”

The woman peers over the seat.  “You’re gonna pay for this, you fucking cunt!”

A chilly breeze fills the interior.

“But what if the cops trace it?” she asks.

“What the fuck are they gonna find?  There’s nothing that can be linked back to us.”

The window closes, yet the cool air linger on.

Kassi’s only other option for escape is to dig her nails into Mitch’s neck, but that option is cut short as the woman leans back and presses a cloth over her face.  Before she can claw at her arm, a strong, sweet smell overcomes her and everything fades into a swirling pool of black and amber . . .